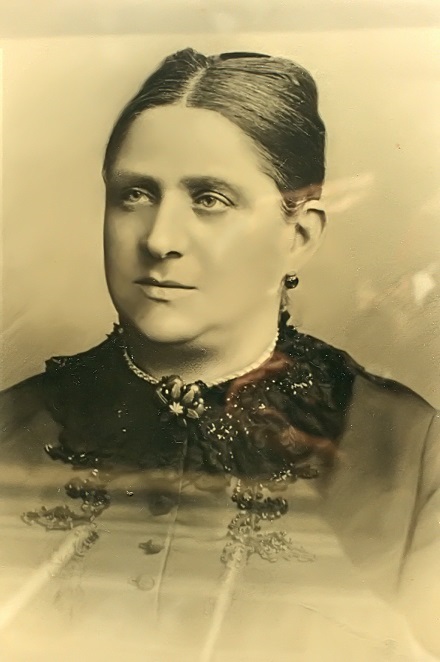 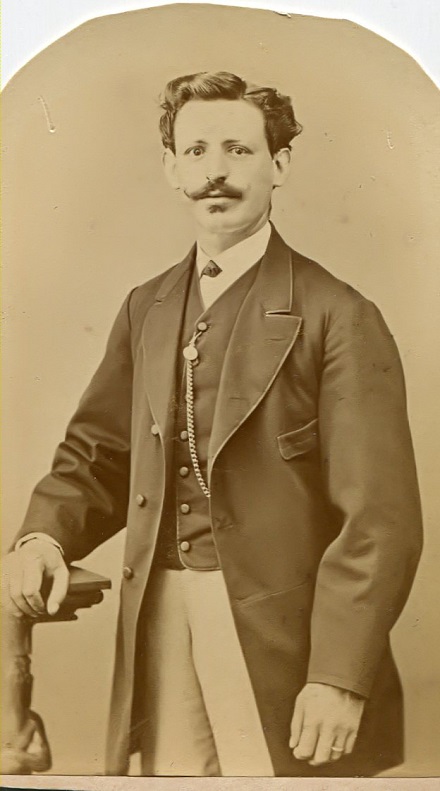 Heinrich with sons Alfred and Hugo 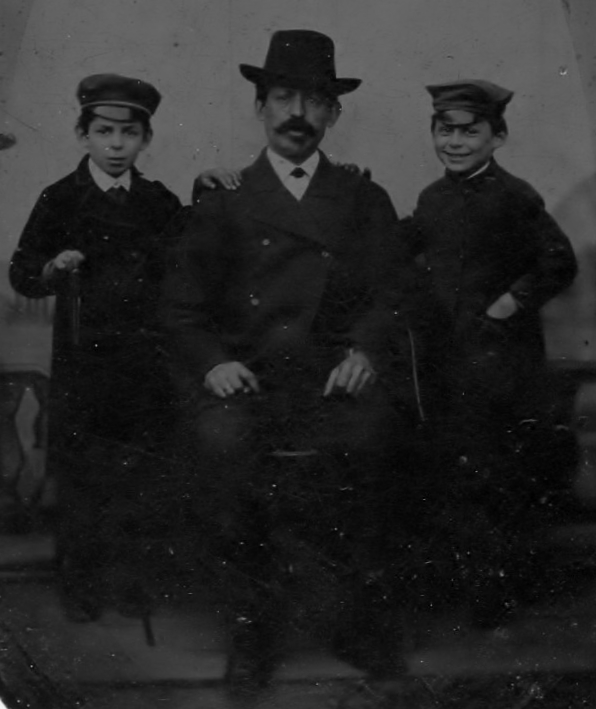 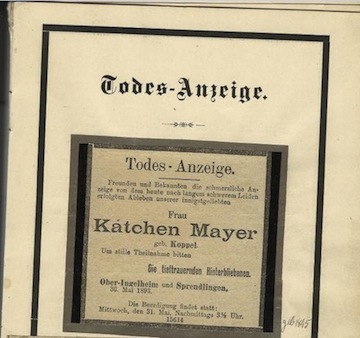 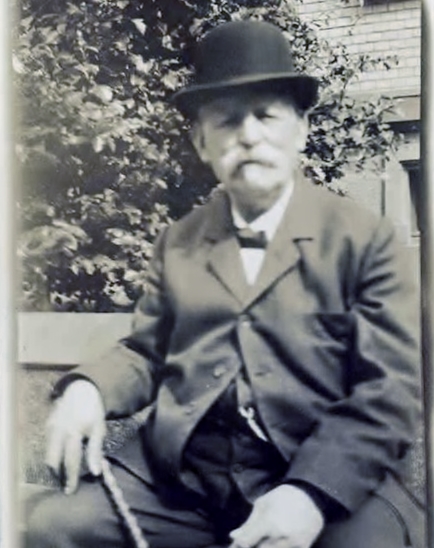 My grandfather Alfred and Eugen moved to London as young men, while Hugo and Helene remained in Ingelheim. In 1904 Hugo took over his father Heinrich’s butcher’s shop.

Helene; and Hugo’s house in Ingelheim 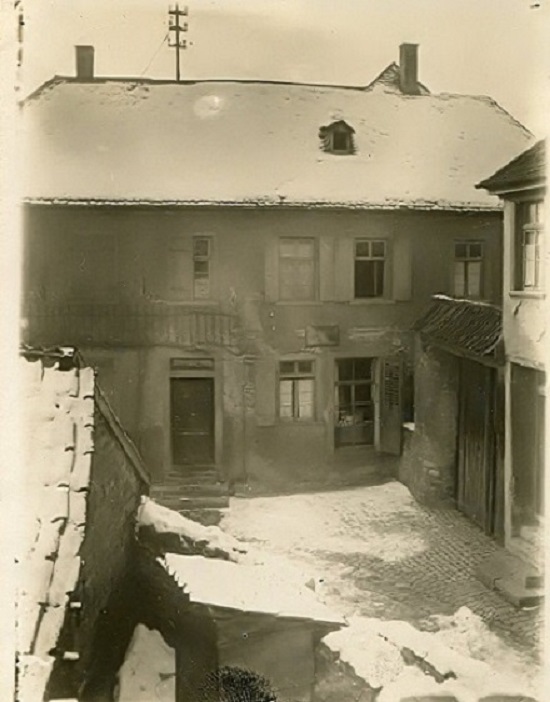 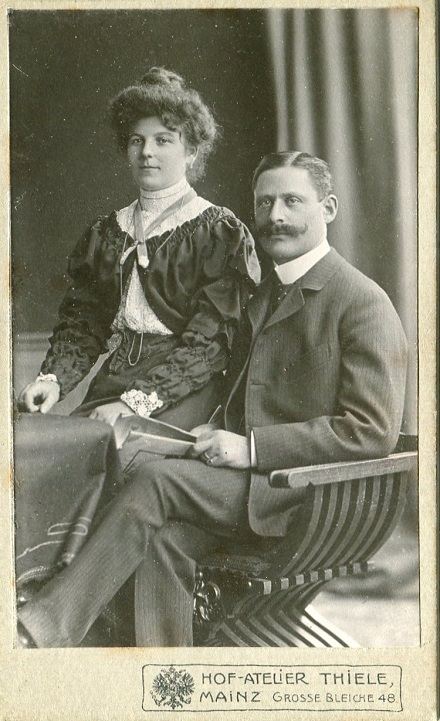 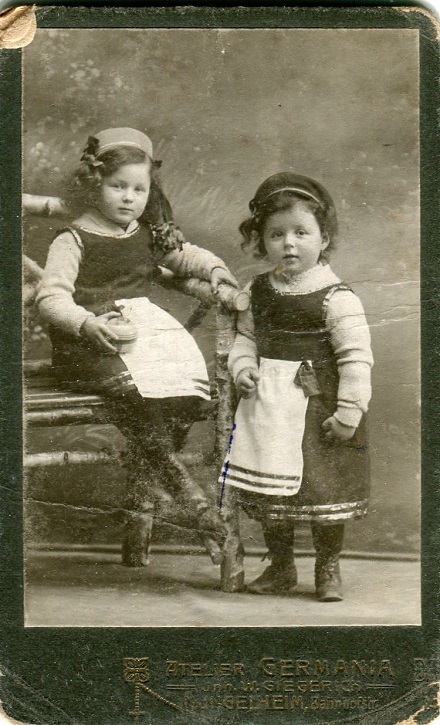 My grandfather Alfred Mayer emigrated to London some time around 1890. This picture was taken on the occasion of a visit to London by his brother Hugo.

The Mayer brothers - including Hugo - in London 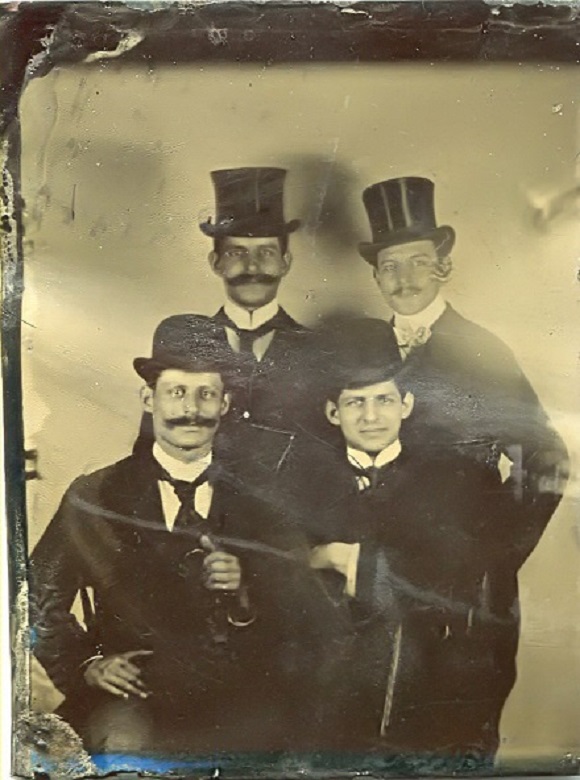 Alfred Mayer married Evelina Scharzschild in 1912. Their first child was born in London on 28th September 1913 and named Ruth Kate (the Kate after her late grandmother Kätschen). At the end of April 1914 Heinrich and his daughter Helene travelled to England for a four week visit. 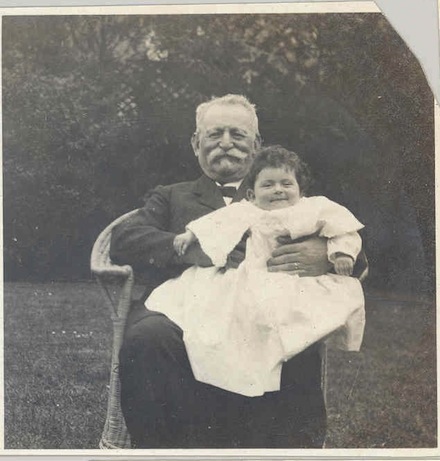 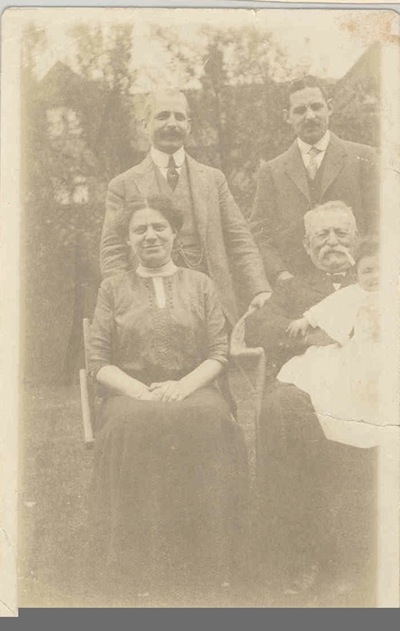 On arrival back in Ingelheim, Heinrich wrote a letter dated 28th May 1914. (See extract below,left. Very many thanks to Mrs Hanna Jones for the translation.)

… Our journey across the Channel was awful, I thought we would not see Ingelheim again. I saw little of the sea because I spent the whole journey in the toilet. Helene was opposite in the cabin, then I heard someone above being sick, it was Helene and it lasted from beginning to end of the crossing, it was horrendous to watch, Helene said ‘I will never travel to London again!’

But it is all forgotten now, the pleasure of feeling better lets us forget those miserable hours we endured ….. I must thank you for everything you did for us, your kindness. I can not write it all down, you know me as your father and I am not one for too many words. But I thank you from the bottom of my heart for everything, you dear Evelina especially, I found you to be as I have heard so often, and it gives me peace of mind, I count you to be one of my children. As I write to you, I have the picture of little Ruth on the table in front of me, do give her a kiss from me.

Love for you all and greetings to all relatives. From Grandfather Heinrich. 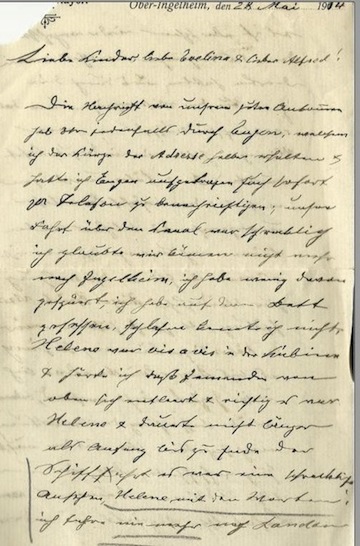 Exactly a month after Heinrich Mayer wrote this letter, on 28th June 1914, Austrian Archduke Franz Ferdinand was assassinated in Sarajevo, and by 4th August Britain and Germany were at war. My mother Nora was born on 2nd December 1914 but she never met her grandfather Heinrich.

In December 1914 Hugo Mayer died aged 41 “after a short illness”, according to this death notice. Heinrich Mayer died in July 1916 aged 76. 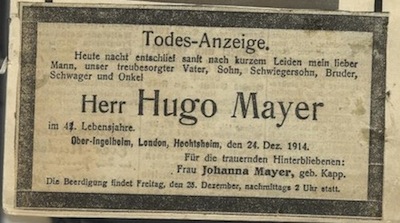 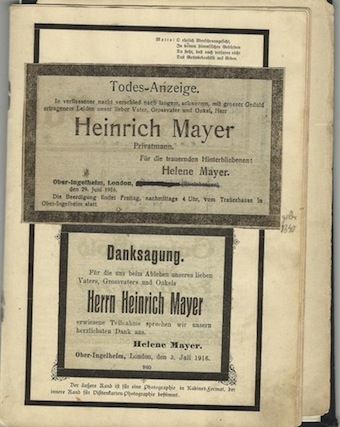 According to Nora, after Hugo’s death his widow Johanna had a very difficult time bringing up the children - Käthe (aged 7) and Ella (aged 6) - and managing the shop alone, especially when the economic crisis hit Germany in the 1920s. Nora also said that Eugen was a very good brother-in-law and that he used to visit her every year and take presents for the girls. He also promised that when they grew up he would have them over to England and find them husbands. Eugen had Käthe stay with him and his wife Bea in Golders Green for a year. Later on Ella came to stay and a match-making with Ben Courts was successful! In 1935 Ben Courts and Ella had a son Hugh who (like Nora) lived in Stanmore, Middlesex, and died in 2019 aged 84.

When Ella was expecting Hugh they managed to get Käthe (Ella’s elder sister) out of Germany. Earlier, when they were first married, Ella’s mother Johanna had visited London and they had tried to persuade her to stay with them as things were getting so bad in Germany. But as she told Nora at the time: “I’m not going to stay because they haven’t been married long and they haven’t got much money, and I wouldn’t be allowed to bring any money over, so I would be a burden on them.” So she went back to Ingelheim, and would die in the Holocaust. Nora’s cousin Ella said to her once, “we should have insisted more, and kept her here”.

Helene, the sister of Alfred and Eugen, was saved from the Nazis: she came to England and lived with Eugen and Bea in Golders Green. She never married, died in 1946 aged 68, and is buried in Willesden.

Käthe Mayer, born 1907, the elder daughter of Hugo and Johanna, worked as a nurse (or nursing assistant) in London during the war. In 1949, when she was aged 42, she married John Seal at the Edgware Synagogue. 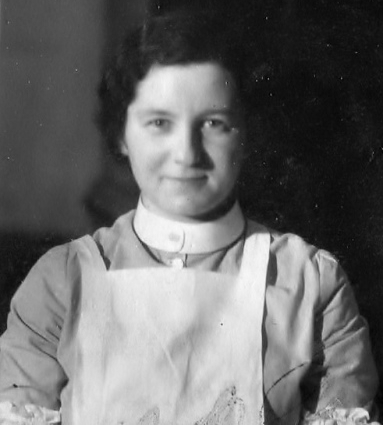 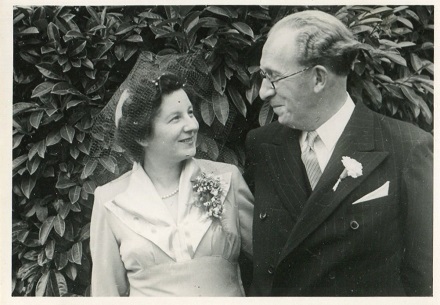 John Seal was a widower. These photos, taken in Breslau (Warsaw), are of his first wife and daughter, who were both killed in the Holocaust. 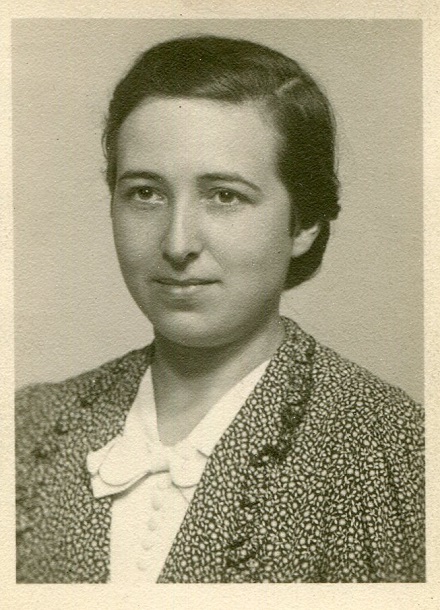 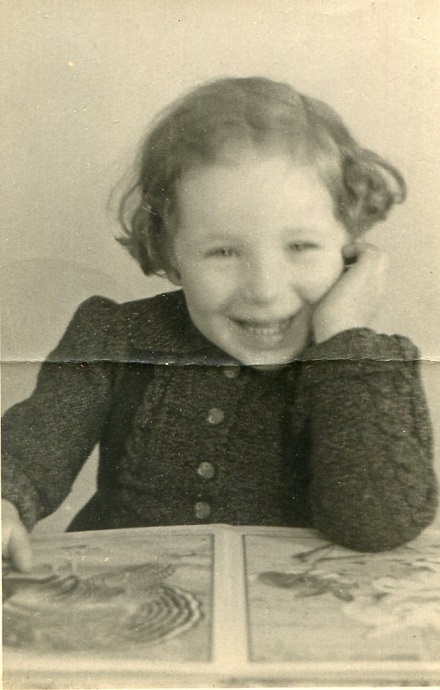 In 1972 Käthe and John Seal were living in Edmonton, North London.

The Kapp family and the Hechtsheim Jews

Johanna Kapp, the widow of Hugo Mayer and mother of Käthe and Ella, had two younger brothers, David (born 1882) and Karl (1885). Karl was killed fighting for Germany in September 1916, aged 31. Less than a year later, Johanna’s mother Mathilde Schlösser died. Her father Emmanuel Kapp died in 1928. So David Kapp was Johanna’s only remaining close relative; a hunchback, he never married, and lived in Hechtsheim his whole life.

The Yad Vashem database confirms that in 1942 both Johanna (from Ingelheim) and her brother David (from Hechtsheim) were deported to Treblinka extermination camp. There is more about the Kapp family of Hechtsheim, including Johanna, and also about Heinrich and Hugo Mayer on the Mainz Jewish Community web site, where it is recorded that Hugo’s death in 1914 was not “after a short illness” (as per his death notice) but was suicide.

The implementation of the holocaust in Hechtsheim has been documented in extraordinary detail by Dr Anton Maria Keim (1928-2016), a native of the town, in his 1994 monograph “From Süssel Hechtsheim to David Kapp: The Hechtsheim Jews”.

David Kapp is still remembered by old Hechtsheimers…. On the decennial anniversary celebrations [in 1932], a special highpoint of village life, Hechtsheimers of the Jewish faith naturally and increasingly took part. In 1932, a year before Hitler’s ascension to power and the onset of the brutal period, Eduard Weiss and David Kapp were among the 37 who appeared in the group picture of the “Class of 1882”. There was no exclusion.

On the day after the pogrom night of November 1938 a jeering audience, including SA members, had the experience of watching David Kapp held out the second story window of his house across the street from the “Office of the NSDAP” and seeing the look of fear of the fifty-six year old man. Any indignation was expressed only behind the hand, so to say, in the family circle, or with friends of the same decent attitude. Yet David Kapp continued to live in the community in which he had been born …

The unassuming David Kapp, of stocky build, was respected by Hechtsheimers. Oldsters recall that in the summer of the first year of the war he still looked after his field and his garden … David Kapp is the last Hechtsheim Jew in the village. He had to experience every form of indignity. The village police were instructed by the acting mayor, at the direction of the state council, to keep an eye on David Kapp’s residence, and to supervise the implementation of the many annoyances imposed. The “Identification Label for the Residences of Jews” was ordered in 1942 by the chief of the security police - “with a paper Star of David conforming in shape and size to the identification patch prescribed in Sec. 1, Par. 2 of the referenced police regulation” - referring to the 1941 regulation regarding the wearing of he Star of David - “however in white…so that it will stand out better against the mostly brown doors.” Such discriminations were described bureaucratically right down to the details.

The district head wrote in the same connection to the mayors of Hechtsheim and Guntersblum on 21 Apr 1942 ordering implementation and periodic surveillance. The mayor, Steffan, added a handwritten notation dated 22 April 1942, “Hierold to check from time to time”. The order concerned the village policemen and related to David Kapp’s house at Adolf Hitler Strasse 8 (today Mainzer Strasse).

The many regulatory harassment’s of the third year of the Second World War included the confiscation of all fur garments and “collection of clothing pieces and old cloth from Jewish possession” (Letter of the state council of 5 June 1942 to the mayor of Hechtsheim). The village policeman noted “Done” on 12 June 1942. On 4 July 1942 a new letter concerning “Service to Jews by Barbers/Hairdressers”. “Under pain of state police action”, wrote the Reich Security Headquarters, service to Jews by barbers/hairdressers is forbidden from this time forward - whether in shops, residences or otherwise. Only service by Jewish barbers/hairdressers is excepted. Here, also, based on the one remaining Jew in Hechtsheim, the local policemen noted “Done”. The same for the order of 21 July 1942 providing, “that, according to a decree of the Reich Transportation Minister, the use by Jews of waiting rooms, buffets and other facilities of public transportation is forbidden.”

David Kapp appears as No. 787 in the 30 September 1942 deportation list of the Gestapo/Gestapo Office Darmstadt (“Transfer of Residence to the Generalouvernement”)…. In a file of Jewish residents of Hechtsheim turned up by chance in the preparation of this work, David Kapp’s name appears with a check mark, as well as a large handwritten entry “X address unknown 1942”. David Kapp was sacrificed to the organized mass murder, as were all the others on the deportation train, one of three that left the Güter (freight) railroad station of Mainz in 1942 with three thousand Jews bound for Piaski, “General Gouvernement” and Theresienstadt. He was the last of his family.

Special thanks to Keith Mayer for information and photos.