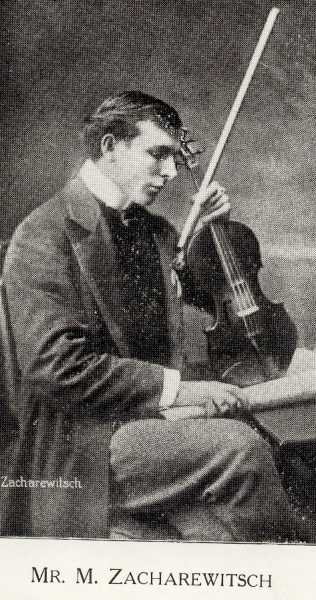 It has generally been recorded that Michael Sisserman (known as Zacharewitsch) was born in Ostrog, Russia, on August 26 1879 and performed under Tchaikovsky at the age of 12. Recently (2014-2015) Guy Fairstein has argued that he was almost certainly born in 1876: see below Zacharewitsch’s 1923 application for British naturalization. The family moved to Kiev around 1888 when Michael was 12 (Gregory was 5 and David 2); from 1888 to 1892 he studied under Ševcik who was professor of violin at the music school of the Russian Music Society in Kiev. In 1892 Ševcik returned to his native Prague.

In January/February 1893, when Michael was aged 16, he had an “extraordinarily successful début at Odessa with Tchaikovsky, who conducted his own [violin] concerto”. (Thanks to Guy Fairstein for verifying this date.) Presumably it was at this time that his family adapted his birth year from 1876 to 1879 to enhance his status as a child prodigy. After this concert Tschaikovsky got up a subscription so that Michael could follow Ševcik to Prague, where he continued to study under Ševcik for some years, while at the same time doing concert tours in several European countries.

After Michael moved to Prague, Sonya was born in Kiev in 1894, and the rest of the family subsequently moved to Odessa.

In 1903 Zacharewitsch moved to London. On 16th November 1904 he wrote a letter (below) from his address at 139 Fellows Road, Hampstead, to his brothers Gregory and David: “The death of our mother made me very sad and I will never forget her. I cried a lot but it doesn’t help. I sent 50 rubles home.” Michael is concerned about their father Zelick and 10-year-old sister Sonya, who are in Odessa. He invites “Sonichka” to come to London and live with him because “Sonichka is suffering the most”. Michael asks “Grisha” (Gregory) to advise him about their father. And he comments that “everywhere is tragedy and war”, almost certainly a reference to the Russo-Japanese War. (Thanks to Guy Fairstein for obtaining a translation of this letter.) 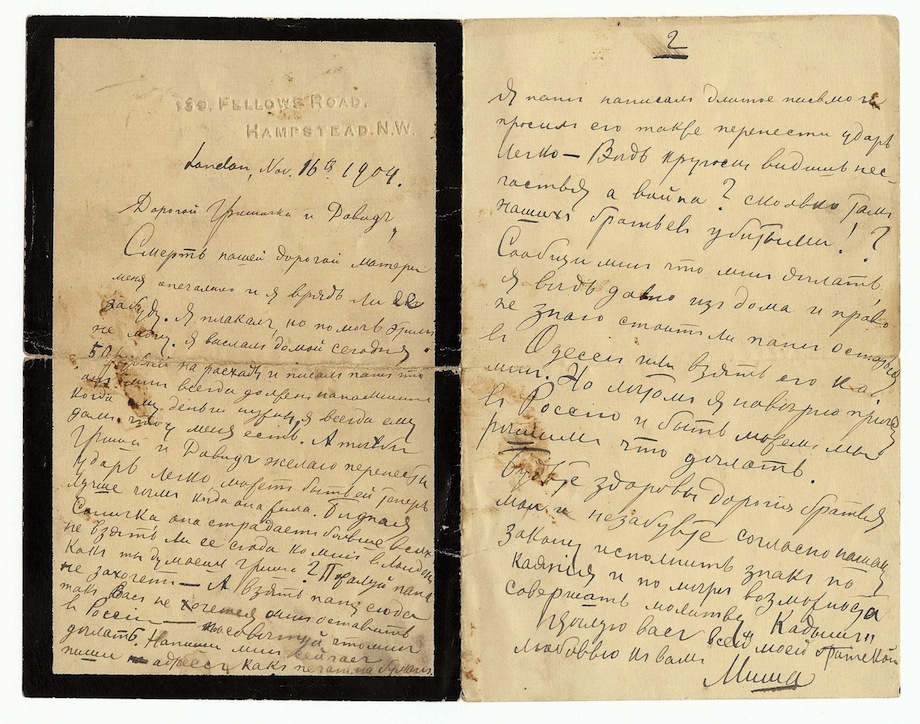 At the Liverpool Philharmonic Society Zacharewitsch gave a performance with singer Madame Clara Butt in March 1905, and with Madame Knopfer-Egli in January 1906. In October 1905 he gave a concert at the London Proms: Nicolò Paganini - Le streghe, Op 13; Franz Schubert - Ellens Gesang III, D 839 (arr. August Wilhelmj); and Tchaikovsky’s Violin Concerto. And in 1906 he gave a concert at the Theatre de Luxe, Norwich.

The composer Samuel Coleridge-Taylor (1875 - 1912) who died of pneumonia aged 37, described Michael Zacherewitsch as “one of my best friends”. (Thanks to Jeffrey Green, a biographer of Coleridge-Taylor, for this information.) In the sleeve notes to a CD by the Nash Ensemble of works by Coleridge-Taylor (Hyperion Records, CDA67590, 2007), Lionel Harrison wrote the following: “One of the larger-scale duos for violin and piano is the Ballade in C minor, which was written for the Russian-born violinist Michael Zacherewitsch …. who gave the first performance with the composer at the piano in Leeds in October 1907. .. His playing was compared by some to that of Wieniawski in its panache and elegance. Coleridge-Taylor openly admired Tchaikovsky’s manner and the Ballade has passionate traits which sound distinctly Slavic …. but whether this was a conscious tribute to Zacherewitsch’s national origins is a matter of conjecture.”

Another friend was Clarence Cameron White (1880 – 1960), a black American “considered the foremost violinist of his race”, who first came to London in 1906 and studied with Coleridge-Taylor; he returned in 1908 to 1910 to study with Zacharewitsch, who invited Cameron White to his wedding in 1909. (Thanks again to Jeffrey Green for this.)

Elgar wrote his violin concerto in B minor Op.61 in 1910, and a note on Zacharewitsch in 1913 says: “He introduced Sir Edward Elgar’s new Concerto to Scotland in 1911, when touring with the Scottish Orchestra, and in the same year interpreted that great work at Sheffield and Nottingham with the Halle Orchestra (under Herr Balling), and also at Liverpool, Birmingham, and in Italy.” A recording of the concerto (VISTA VERA VVCD 00048 [74.04]) notes that “the Russian School has often espoused the Elgar Violin Concerto, right from the days of the pioneering Michael Zacharewitsch in the teens and twenties.”

The 1913 note also states that Zacharewitsch “is the composer of many violin solos, and has now (January, 1913) completed a new work for solo violin, accompanied by string quartette and recitation, based on a poem on ‘Life and Love,’ by the Queen of Roumania.”

In November 1911 he performed Tchaikovsky’s violin concerto with the York Symphony Orchestra, and at the same event played violin solos including Ave Maria by Schubert and his own composition Imagination (a later recording of which is available on YouTube, as well as several other records by Zacharewitsch). 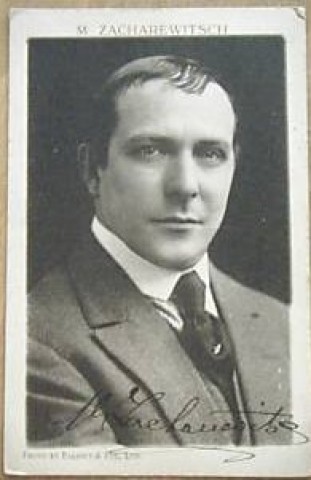 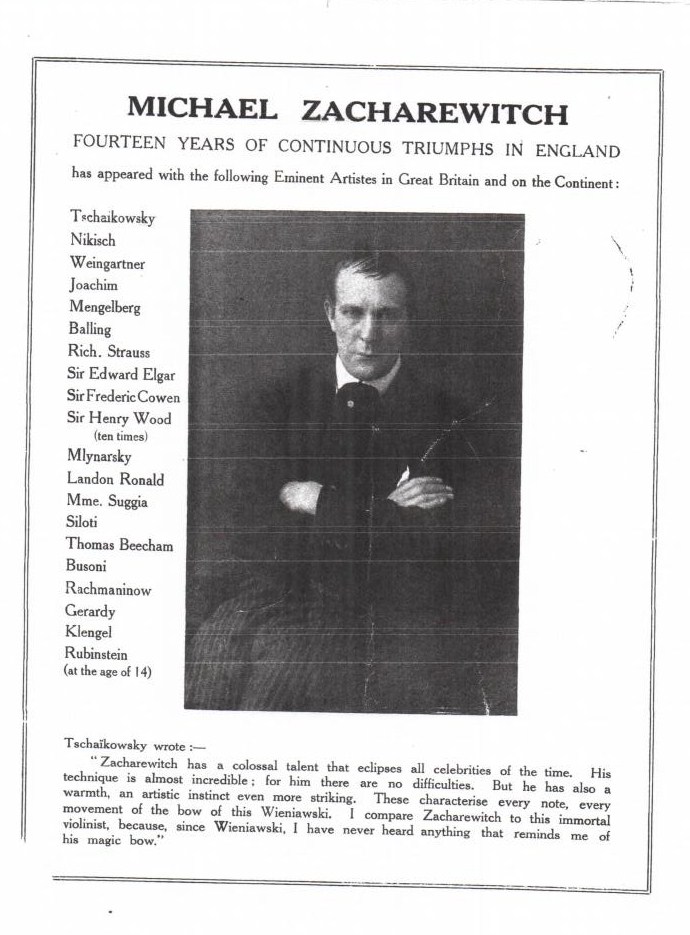 Some time after the end of the 1914-1918 War, possibly in early 1919, Zacharewitsch’s wife Joan Saxby wrote to her sister-in-law Sonya; at that time Joan was still working at the Ministry of Munitions of War, and had recently moved to 136 Portsdown Road, Maida Vale. (“Jack” is her son Joseph Saxby.)

… You will see … that we have changed address. Michael has taken this flat for five years and your Father is living with us. It is a large place, ten rooms in all, and divided in two floors - very convenient being only a two minutes walk to the Bakerloo Tube …..

Michael is away on a forty weeks tour, and comes up for an occasional week’s holiday. He is extremely well and, as usual, very busy. Your Father too is looking very well, and I think likes the flat. Michael has left him a mission in life, and that is to teach Jack the fiddle…

London is beginning to get a little more normal … though even now the cost of living, housing, clothing, etc., is fully treble what it was prior to the war … For the last 2½ years I have been working at the Ministry of Munitions, clerical work, I like it very much, and shall be extremely sorry when it comes to an end, but now they are demobilizing all staffs at a fearfully rapid rate, and do not expect the work will last out more than a few weeks, though it might still hang out till July….

You are awfully lucky getting around the world as you are …. Do you like it out in the East - or do you wish you were back in London? Personally I hate this town, and still hope to get back to America eventually….

Zelig Zacharewitsch’s letters to Sonya near the end of his life include several revealing passages about Michael and his wife Joan.

…. You want to know how I am. Well I live with Michael and I teach his son, Jackie, the violin. Joan is away in France and we do not know whether she will ever come back….. It is true, I am living with Michael but I still have plenty of expense. As you know Michael’s character, I cannot go to him for every single thing….. Michael is rich and living very well and is a great artist, but I give nothing for all his goods and wealth and “happiness”, as his life is a miserable one.

… Do not think that it is so pleasant living with my son; his wife has been working for the Government, and now she has left him 6 weeks ago, and gone to America ….

… you sent your letter to Michael’s address. Please do not do so in future because I do not live with him. He turned me out, because he said that Joan [Saxby, his wife] left him through me.

… As you see by this I have come back here [Michael’s address] to live, as I find I cannot live with strangers …. I teach Jack the violin, he has talent, but nothing is settled about Joan and Michael, in July she will either come back, or go away for good.

More than a year after the death of Zelig Zacharewitsch, on 2nd November 1921, Michael wrote a letter to Sonya:

… I have made a mess of my life and I am not as happy as you think - money is not everything and even money is in a very bad state ….. Jack is well - he is soon going to a boarding school. I shall soon become a British Subject and shall travel all over the world …. Joan is away in Australia, she writes sometimes …

In 1923, when Michael applied for British naturalization, he was investigated by Police Special Branch (perhaps due to prevailing anxieties about Bolshevik spies?): 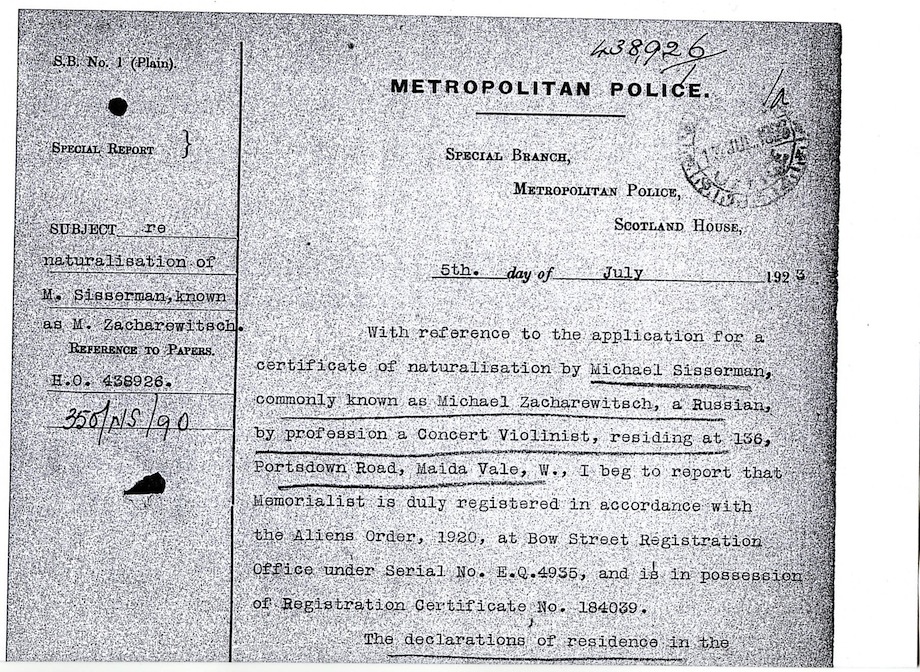 The document states: “Memorialist informed me that he was born on the 26th August 1876 (not 1879 as stated in his memorial) at Ostrog, Volinya, Russia, of Russian parents - his father being Zelik Sisserman and his mother Jente Sisserman, nee Drucker….. Memorialist was educated at Ostrog, and at the age of twelve he was taken to Kieff and later to Odessa, at which towns he studied educational and musical subjects. Eventually he went to Prague, Austria, where he gained the Diploma for Music and Musical Science.” The document also records that in 1897 Michael had been called up for Military Service but was exempted as the eldest son. In 1903 he “came to England, and has been here ever since” except for several short visits to France.

Once he was a nationalized British subject Zacharewitsch was able to travel the world, and in 1924 made a tour of Australia. A ship’s manifest of 1924 shows the arrival of Michael Zacharewitsch in Honolulu, travelling from Australia en route to New York. Another manifest of 1925 shows Michael, his wife Joan Saxby and son Joseph arriving in New York from Liverpool. (Joseph Saxby’s obituary refers to the fact that “at the age of 15 he toured America as his father’s accompanist”.) When Michael returned from New York in 1926 his address was 7 Castellain Mansions, Maida Vale, and in the London phonebooks from 1927-1930 his address was nearby at 140a Elgin Avenue. From 1931-1939 his address was 3 Garrick Ave, Golders Green, NW11. 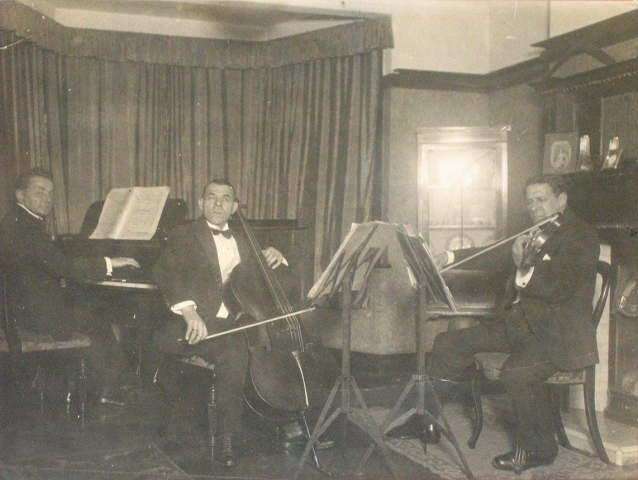 The pianist is Serge Krish. A review of a recording by Joyce Hatto of the TCHAIKOVSKY Piano Concerto No 1 ( CACD 9086-2) says that Hatto “learnt the Tchaikovsky B flat minor with Serge Krish before living it with the violinist Michael Zacharewitsch (who’d known Tchaikovsky personally, and from whom, she says, she ‘learned much about the Russian idea of performance and of Tchaikovsky in particular’). “

W. W. Cobbett, in the 4th edn. of Grove Musical Dictionary, 1940, writes that Zacharewitsch in addition to Ševcik “had also the advantage of a few lessons from Ysaÿe. ln l893 he played at Amsterdam under Mengelberg and in 1903 gave his first recital in London, after which he toured the English provinces…..and played with success, displaying considerable breadth of style.”

Electoral registers from 1947 show Michael and Joan living at 118 Greencroft Gardens, South Hampstead - the same street where Raichka and George were living in 1934. They were at the same address when Michael died on 20th December 1953, leaving £1,437 to his widow. An obituary appeared in The Musical Times in February 1954.

Michael Zacharewitsch’s widow Joan died in 1961. Her probate record gives her address as 3 Garrick Avenue, Golders Green. Her death took place on 15 October at the Napsbury Hospital, St Albans, Hertfordshire, which was then a Mental Hospital. Her probate records the sum of £3,299 and the beneficiary was not her son, Joseph Saxby, but “Alice May Horton, spinster”.