My maternal great-grandmother Adela Marden (1856 - 1941) was one of the many children of Isaac Moses Marsden and his second wife, Esther Gomes Silva.

In 1881 Adela married Jacob Schwarzschild, a stock broker who apparently managed at least some of the investments of her father. Their original marriage settlement, on parchment (kindly lent to me by my cousin Keith Mayer), has two parts: “Settlement in contemplation of the marriage …” dated 1st June 1881 (three weeks before the marriage); and “Declaration of Trust …” dated 12th August 1882. Isaac Marsden contributed £5000 in the 1881 settlement and a further £5000 in 1882.

Adela’s 1882 settlement was contemporaneous with the The 1882 Married Women’s Property Act which allowed married women to own and control property, including that owned at the time of marriage.

A transcription of the entire Marriage Settlement can be downloaded here. 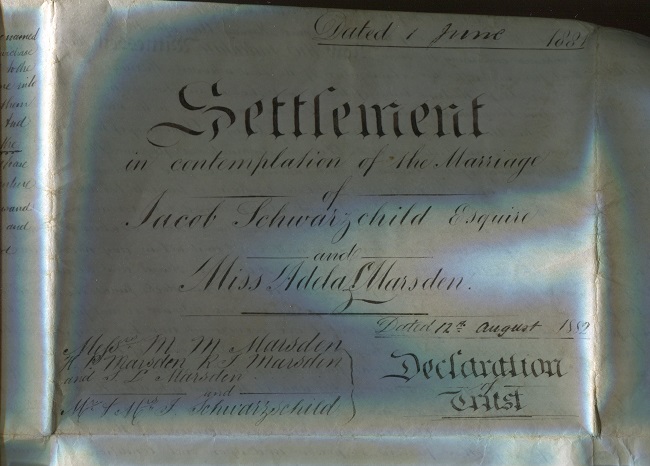 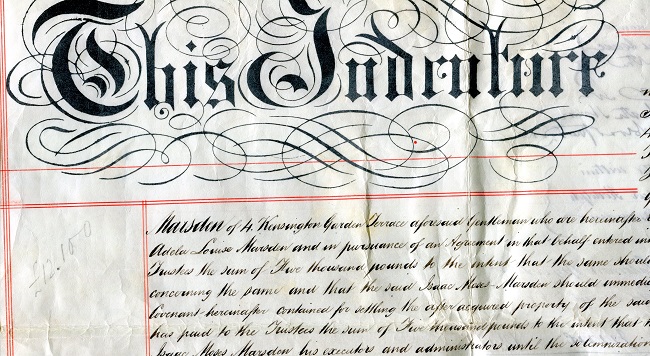 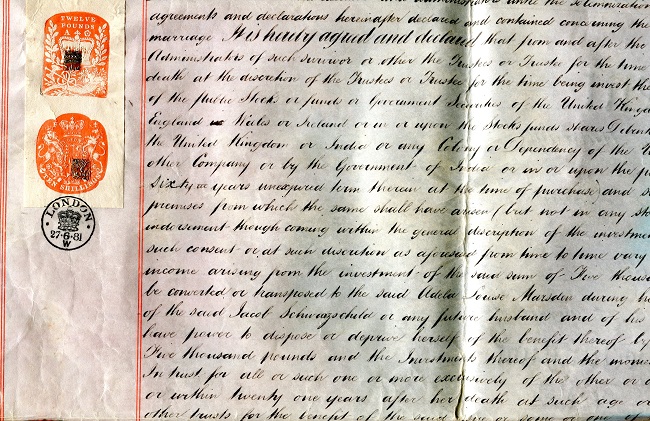 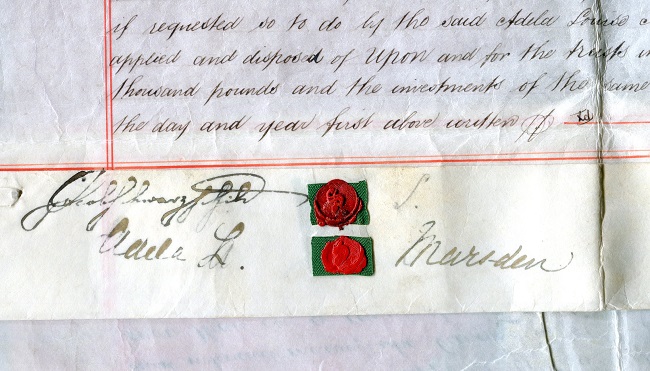 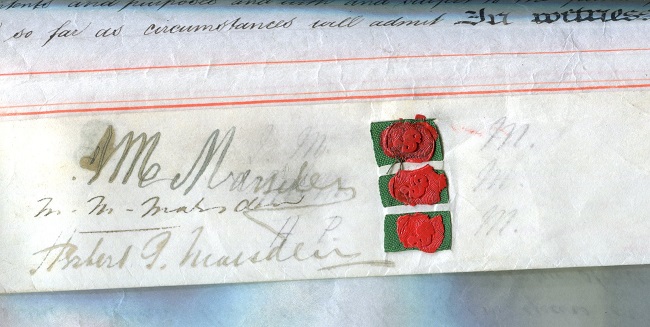 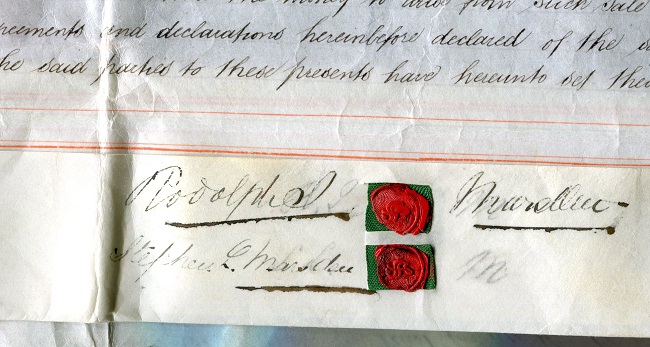 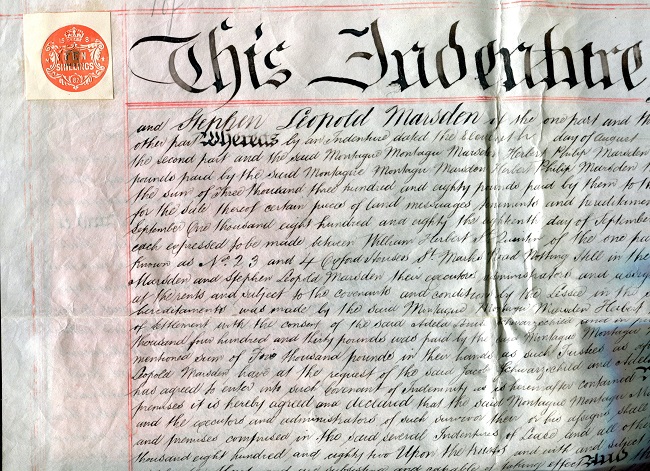 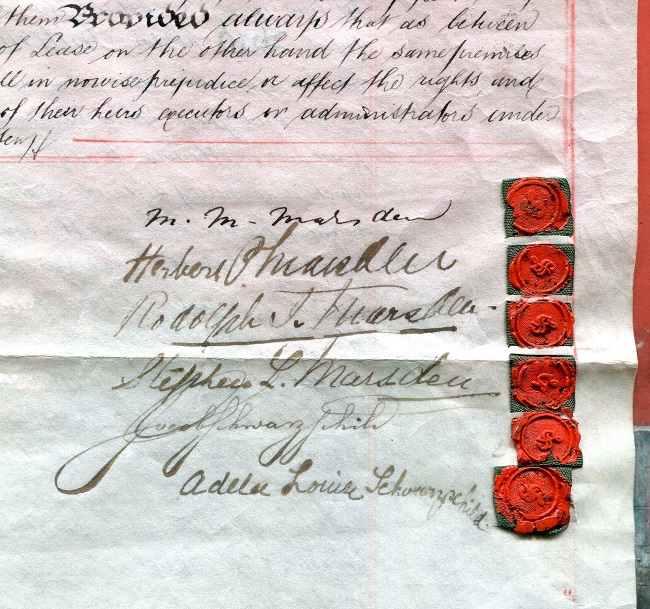 Jacob and Adela Schwarzschild had four children: my grandmother Evelina Adela (born 1883), Albert Isaac (1886), Percy Herbert (1889), and Constance Madeline - known as Connie - (1892). Presumably Connie’s names were in memory of two of Adela’s sisters: Constance who died in 1887 aged 37, and Madeline who died in 1880 aged 34. See Marsdens in France 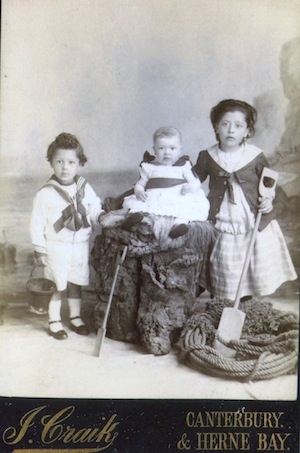 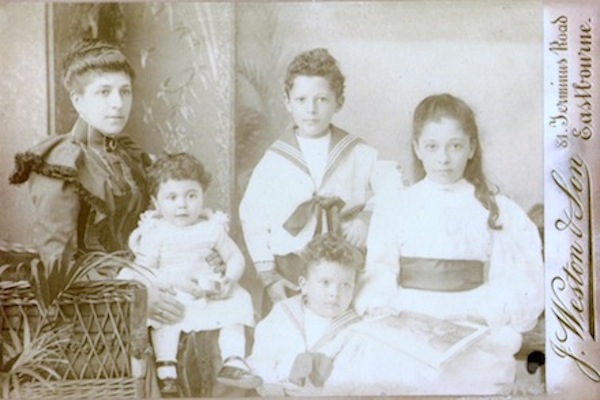 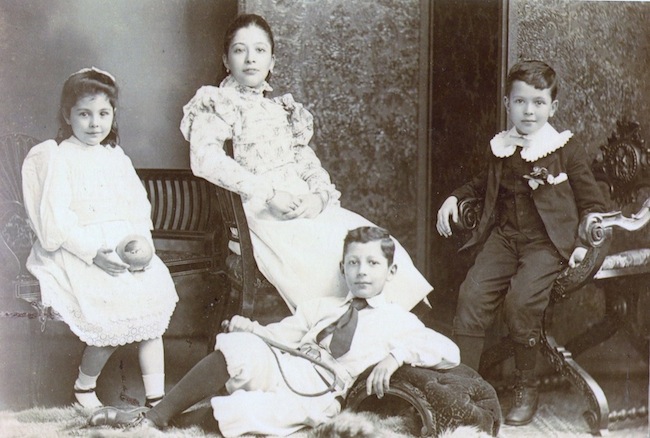 In the 1911 census, when Jacob was aged 57 and Adela 55, all four children were still living at home, 58 Pembridge Villas, Bayswater: Albert (aged 25) and Percy (aged 22) were both stockbrokers, Evelina was aged 28 and Connie was 19. Albert and Percy had both joined Jacob’s stockbroker business which became Messrs. Jacob Schwarzschild & Sons.

Also on the 1911 census return for the Schwarzschild household was Florence Turner. a Ladies Maid aged 26, born in Tillingham, Essex. Florence was to have a son, Leslie Jackson, who for many years ran a garden nursery near Chelmsford, Essex; Leslie would later marry Joyce Mayer, my mother Nora’s sister - a very controversial marriage on both class and religious grounds!

Of the four children of Adela and Jacob Schwarzschild, only my grandmother Evelina would have children of her own. In December 1920 Albert married a Dutch woman, Frederique Cohen (known as Freda). Ruth, my mother Nora’s sister, told this story: when Albert Schwarzschild wished to marry Freda, his father Jacob said he could do so but only if Freda had an income of £10000 a year. Freda had an income of £20000 - so they did marry! Albert and Freda had no children. In 1925 Percy married Clara Samuel, a niece of Herbert Samuel, the politician who as High Commissioner of Palestine was a prominent and controversial Zionist: see Timeline of Isaac Marsden at 1917. Percy and Clara were also childless.

As for Connie, under the terms of an Indenture prepared in 1925 (slightly amended in 1930 following the death of her father) and of Jacob’s will, she was endowed with a settlement of £10,000 from which she would obtain the interest from a Trust managed by her stockbroker brothers. But it was specified that “in the event of the said Constance Madeline Schwarzschild intermarrying with a person not of the Jewish faith” she and her children would forfeit this legacy: Connie would receive only an annuity of £100 per annum. But Connie never married.

After the death of Jacob Schwarzschild in 1929, the family moved from their house at 58 Pembridge Villas. The SeatHolders records of the United Synagogues show that in 1933 Adela was living at 8 Zetland House, Marloes Road, W8; Albert was at 77 Palace Court, W2; and Percy at 4 Essex Villas, Campden Hill, W8. The electoral roll for 1935 shows Adela and Connie living at the South Kensington Hotel, Queen’s Gate Terrace, Kensington.

In 1935 Jacob Katz, who became “the world’s most distinguished scholar of Jewish social history”, left the University of Frankfurt and sought refuge outside Germany. Arriving in London, and since his future mother-in-law was a daughter of Michael Schwarzschild (brother of Jacob), he contacted Albert and Percy:

One of them [Percy] had married into the family of Sir Herbert Samuel, the first Lord High Commissioner of Mandatory Palestine. The Schwarzschilds thought that such highly placed relations could be of help to me in London….. By this stage the major cities of Europe were flooded with refugees from Germany, many of whom arrived completely destitute…. The various Jewish circles had mobilized their forces, in the time-honored tradition, to render assistance to those in need.

Naturally, I did not delay in calling upon the Schwarzschild family, first at their banking establishment and afterwards by invitation at the family’s sumptuous homes. They were unfailingly cordial, but it was clear that they would be of no assistance to me in establishing some sort of financial base. Although the brothers were only second-generation German émigrées, they displayed no comprehension of the disasters that had come upon their own flesh and blood and made no effort to help the needy among them. This may have been due to their wives, who dominated them. For instance, the family’s queen dowager [Clara], who was of Herbert Samuel’s line, railed against the ‘Jewish Chronicle’ for insisting upon inundating its readers with ghastly stories of German concentration camps. (Jacob Katz, “With My Own Eyes: The Autobiography of an Historian”, 1995, pp 99-100)

In 1940 when my parents Nora and George married in London, Nora’s grandmother Adela was invited to the wedding, as well as Connie, Albert (and Freda), and Percy (and Clara). Nora told this story:

I was a bit scared, because I thought, what does she want to see me alone about? Does she want to tell me about the facts of life or what? So I had to go and she was absolutely marvellous – I’ve often thought about what she said because it’s a lesson for life. She said, “I want to give you some advice. I’m sure now you’re very much in love, but you must remember that when the first love dies off, which it usually does, there are other things, and you must give as much as you take, you must always remember that. You mustn’t just expect everything from your husband, you must give him as much as he gives you.” And you know, I’ve often thought of that, of what she told me, all my life – that’s what she wanted to see me for. And after we’d been married we went straight from the ceremony to see my grandmother.

On hearing of my parents’ engagement, Albert Schwarzschild (whose wife Freda was Dutch) wrote to Nora on 16 May 1940, six days after the Netherlands had been invaded by Germany and the day after its surrender: “Dear Nora, Your letter to hand, contents I have noted. Owing to your Aunt’s mother and sister being in Holland, and no news as to their whereabouts, she is naturally very worried …” In June he wrote to decline their wedding invitation: “In these sad and uncertain days your Aunt and I feel we cannot participate on Sunday”.

Percy Schwarzschild also wrote to Nora about her engagement on 16 May 1940; he was living at The Royal Palace Hotel, Kensington. “Since the outbreak of war we have had to give up our home to which we were deeply attached, Clara is evacuated ‘in rooms’ to Bude [Cornwall] and I continue to live in the same one room here whilst going daily to work. In common with many other people in these anxious times we have naturally found this a big wrench …”

In 1941 Adela died and was buried at Willesden.

Below are reproduced pages from Connie’s Prayer Book where she noted the deaths of members of her family: her father Jacob in 1929; Alfred Mayer (my grandfather, married to Evelina), in 1935; Adela in 1941; Evelina in 1959; Albert’s wife Freda in 1960; Percy’s wife Clara in 1963; and Albert also in 1963. Albert’s death was noted in The London Gazette, where it is noted that he had retired to a flat in Grand Avenue, Hove, Sussex. Viscount Herbert Samuel, Clara’s uncle, also died in 1963.

In her Prayer Book Connie also noted the death in 1964 of Ted Fischeles, the first husband of Ruth Mayer (my aunt). And finally “Dear Percy passed away” in 1980, aged 91; an article on British Jews who died in that year describes Percy as “stockbroker and communal worker”. Connie herself died in 1981, also aged 91: there is a death record for Constance Madeline Schwarzschild in Hendon, Middlesex. Buried at Willesden. Connie had lived for many years in a flat in Bournemouth, but towards the end of their lives both she and Percy moved to Waverley Manor old people’s home in Hendon, which was run by Donald Samuel, a brother of Percy’s wife Clara; this is now Clore Manor and part of Jewish Care. (Information from my late Aunt Ruth and Alan Philipp.) 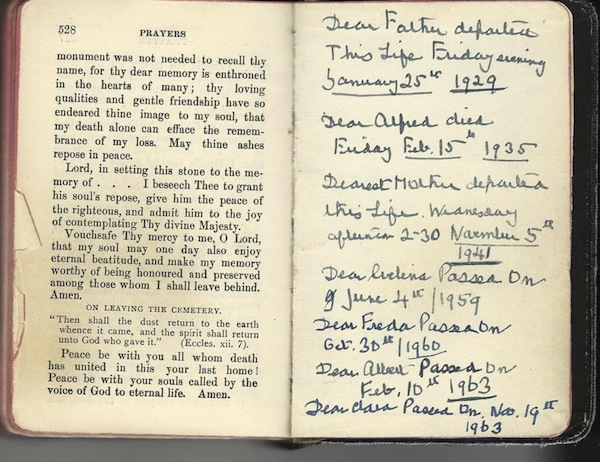 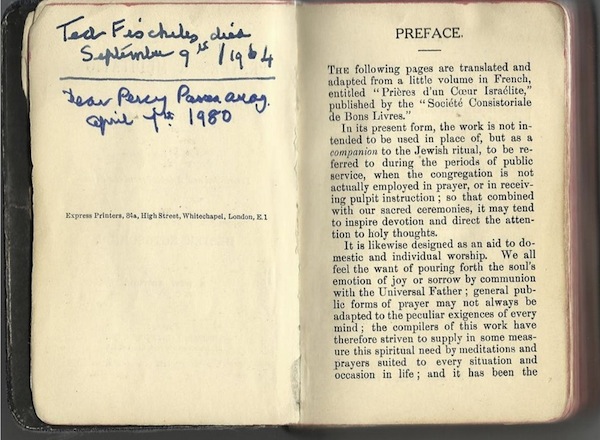